The holiday season is reaching peak form (trust me, I do see all of your out of office emails), and it’s hard to believe 2016 is just around the corner. However, before TVP Comms starts its own holiday break tomorrow, we wanted to share a couple end-of-year media hits and detail what we’ll be reading, doing and looking forward to on our days off. 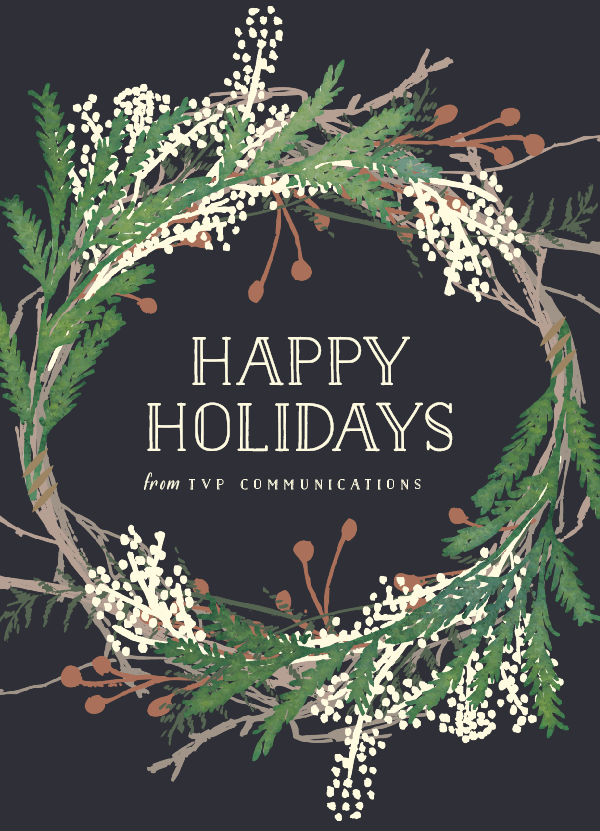 First up, Mary Johnson from Higher One provides some advice for the parents out there on how to have the “College Money Talk” this break. And if you want to read up on how some institutions are taking innovative approaches to degree offerings, this Inside Higher Ed piece about the University of Wisconsin-Extension should be on your list.
Now, on to our holiday to-do lists!
Erin Hennessy
Here’s what I’ll be doing over the holidays: Finally, finally, finally reading Gay Talese’s The Kingdom and the Power. Originally published in 1966, the book goes behind the scenes at one of my favorite institutions, The New York Times, “revealing the stories behind the personalities, rivalries, and scoops at the most influential paper in the world.”
And once that’s done, I’ll be diving into my every-four-years reread of the best political book I’ve ever read: What It Takes, by Richard Ben Cramer. The book is 1,000 pages of amazing insight and reporting on the 1988 presidential campaign, including the best sketches of the six men who sought our nation’s highest office that year.
Bobby Mathews
Here’s what I’m doing over the holidays: Reading an advance proof of Lawrence Block’s Writing the Novel from Plot to Print to Pixel, which is due out on January 4. I won’t argue that Block is America’s greatest living novelist, but I can (and will) argue that he’s among the most professional. This is a guy who has built a decades-long career of writing fiction, and he uses that committed professionalism to show wanna-be fiction writers how writing a novel can be done.
After that, I’ll be catching up with some scary stories via Stephen King’s new collection of short fiction, The Bazaar of Bad Dreams. As a young boy, Stephen King scared the heck out of me, specifically with one of his short stories (The Boogeyman, in the collection Night Shift, in case you’re wondering.) I hope these new stories are just as powerful, and that they make me simultaneously regret and enjoy sitting up alone in a darkened room, reading until the wee hours of the morning.
And finally, I’ll be going to see Star Wars: The Force Awakens again. And again, possibly. That film was so well done, with consistent callbacks to what made the original trilogy—and especially A New Hope—so compelling. Go see it, if you’re one of the five people on the planet who haven’t made it to the theater. And if you’ve already seen it, go see it again. It’s spectacular.
Kristine Maloney
I saw this flowchart for the first time yesterday, and even though I’m not really big on New Year’s Resolutions, I have resolved to print this out and post it over my desk as a daily reminder. AND, I’m going to start before January 1, because as our optimist leader tells me often, “everything always works out.” And it usually does, no matter how much I’ve stressed over it. So, this break, I’m going to take things in stride.
I will also definitely spend time outside (it’s going to be near 70 degrees in Massachusetts on Christmas Eve), including a day or two at the beach in Newport, RI. I love walking the beach in winter. And, I anticipate lots of time playing new board games with my kids. I hope to dive into a few new books too—but that will all depend on what Santa brings me. Mindy Kaling’s latest was on my list. Happy holidays and best wish for a fantastic 2016!
Teresa Valerio Parrot
This year has had so many magical moments of reflection for me and I am thankful for what I’ve learned about myself and the world outside of me. For that reason, I am excited to read two books gifted to me this holiday season—both extend my personal journey into the new year. The first is Turn Right at Machu Picchu: Rediscovering the Lost City One Step at a Time, which allows me to further grow my love of the Incan and Peruvian people. And the second is a biography, Buddha, which was the recent topic of conversation at dinner with a dear friend.
And speaking of peace and love and happiness—my chocolate-loving world was turned upside down with a gastric scandal! If you haven’t been following the tale of Mast Brothers Chocolate, here’s an overview. The investigative reporting itself is worth a read at: http://dallasfood.org/. Moral of the story—don’t mess with people’s chocolate!
Kyle Gunnels
In addition to reading the two books I mentioned in last week’s Week in Review post, Every Man in This Village Is a Liar: An Education in War and The Man in the High Castle, I will inevitably get lost in a myriad of think pieces and political commentaries all trying to answer the same question that’s been stumping most rational people for months—Donald Trump, really? FYI, this Atlantic article is a fantastic, long read from one of George W. Bush’s former speechwriters about how the Republican Party is in the state it’s in today.
One of the things I’m most looking forward to this holiday season, aside from eating my weight in chips and salsa while in Texas, is spending New Year’s Eve watching the Alabama Crimson Tide take on the Michigan State Spartans in the College Football Playoff! Here’s a lovely video of my boy Edward interviewing some of college football’s finest about what they expect to happen during the playoffs. ROLL TIDE!