Yesterday I was honored to serve as moderator of a panel at the NASPA annual conference. Not only was I surrounded by amazingly powerful women who serve as chief student affairs officers, I had the ultimate front row seat as they told their stories from the frontlines of an unprecedented disaster. 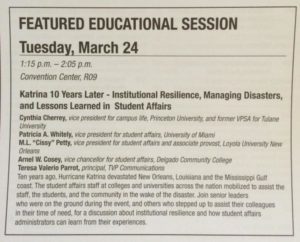 The session, “Katrina 10 Years Later – Institutional Resilience, Managing Disasters, and Lessons Learned in Student Affairs,” included heartbreaking stories from Cyn Cherrey, Arnel Cosey and Cissy Petty, alongside their personal and professional case studies of resiliency. With the perspective associated with the passing of 10 years, it was amazing to hear their thoughts on how their institutions; Tulane University, Delgado Community College and Loyola University New Orleans, respectively; are now stronger than before the storm. And their thoughts on lessons learned from Hurricane Katrina were insightful– All three were focused on caring for people above all else, which is a position I support and greatly respect.
The fourth panelist, Pat Whitely, described Katrina from an entirely different perspective and one that I believe deserves remembering. She talked about the collective and swift action by the higher education community; led by the American Council on Education (ACE),  National Association of College and University Business Officers (NACUBO) and National Association for College Admission Counseling (NACAC); to offer support to our colleagues in the areas most impacted by the hurricane and its aftermath.
On Monday, August 29, 2005, the levees in New Orleans were breached. By Friday, September 2nd, ACE and NACUBO had organized 300 institutions willing to offer support, which quickly grew to 400 colleges and universities by Tuesday, September 6th. An archived communication from ACE President David Ward stated that these institutions agreed to the following guidelines:

You read that correctly- hundreds of institutions took in the thousands of displaced students and allowed their home institutions to keep their tuition revenue. We came together to help our peers stay financially viable, allowing them to reopen their doors to students many months later.
I was struck by the power of that story, because I worry we’ve forgotten that our collective strength is nothing short of amazing. Unfortunately, it might just take the direst of times for us to put aside our own challenges and rally around the health of our industry. My only hope is that the next storm isn’t already upon us and the levees associated with academia’s financial health aren’t close to being breeched. And if/when they are, will we come together again?