The TVP Comms team was reunited in Boston this week for our staff retreat and it did not disappoint. One of the highlights was hitting up Mike’s Pastry in the North End for some delicious cannoli. Did you know that the word cannoli is actually the plural form of the word? One cannolo for each of us, five cannoli for the group. You can thank my college Italian for that bomba della verità (truth bomb, roughly).
And despite the quality time spent as a team and dessert bonding, some of us couldn’t get enough of each other and went to Des Moines to hang out with giant bulldogs. No, really: 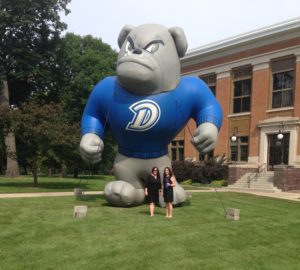 As you wrap up your work today, don’t forget to scroll down to get a recap of the happenings in higher ed this week.
What’s new this week:
Andrew Morse and Lindsey Hammond of NASPA wrote a piece for The Chronicle of Higher Ed to make the case against more guns on campus.
Farmer School of Business professor William Even penned an article for The Conversation on corporate America and solving the growing problem of youth unemployment.
In another Conversation piece this week, University of Wisconsin Colleges and University of Wisconsin-Extension Chancellor Cathy Sandeen discussed the impact of Ivy League women presidents on higher education.
Drake University Vice President for Enrollment and Admissions Tom Delahunt offered expertise on the pros and cons of commuting to college in an article for U.S. News & World Report
Drake professors also had a lot to say about the primary GOP debate from this week. In a piece for The Conversation, Anthony Gaughan gave his insight on what Trump’s warning that he may run as an independent candidate means for the Republican Party. Professor Dennis Goldford weighed in for the U.S. News & World Report Debate Club on the winner of the debate.
What we’ve been talking about:
The importance of the fateful (sometimes dreaded) college essay in the application process seems to be dwindling. The 2015-2016 Common Application even made it optional for schools to choose if they wanted to request an essay or not, and despite her own terrible essay, Ali Lincoln offered her two cents on why the essay still matters.
This week, Jon Stewart signed off from the Daily Show, marking an end of a news era, especially for political news junkies. Kristine Maloney examined his impact on journalism and comedy.
Over on the Inside Higher Ed’s Call to Action blog, Teresa Valerio Parrot discussed important communications considerations for boards and board members.
What we’ve been reading:
Erin Hennessy
I was unfortunately flying home last night during the Republican debate on Fox. Fortunately, my flight had wifi so I could follow the audience reaction on Twitter. But the best way to keep up on the actual substance of what was said was a new platform called Genius that was used by The Washington Post. The Post was able to create a live transcript of the event that readers could then annotate and comment on in real-time. Here’s hoping they utilize the platform through out the campaign season.
Teresa Valerio Parrot
After a week on vacation, I spent my week reading email. For that reason, my contribution this week is for your viewing, not reading, pleasure. Scientific American featured their top ten science selections from among Jon’s many, many highlights reels. One of the things I loved about his approach to news was that it also informed. For those who weren’t into science like I am, they could laugh while they learned.
Kristine Maloney
Yum! I read this at lunchtime (big mistake) and instantly craved every food the author mentioned. But the science behind why we love comfort foods was interesting, too, and makes a lot of sense.
This piece about life in prison caught my eye simply because it was so unlike most in the Chronicle. Parts of the author’s experience surprised me. Parts angered me. But above all, it got me thinking about his life now and the role of education in it. And while new conversations about Pell Grants for prisoners this week are a step removed from this piece, my brain couldn’t help make the leap and see the potential education can create for prisoners.
Kyle Gunnels
Yesterday marked 70 years since the bombing of Hiroshima, a city whose name became synonymous with the destruction of the atomic bomb. However, Hiroshima wasn’t always the main target for the first atomic bomb to be used during wartime. The Atlantic provided a detailed history of the decision-making process and the committee tasked with deciding which cities to bomb. And if you want to visualize just how great the impact of the bomb was on Hiroshima, you can use PRI’s tool to scale the bomb’s fallout centered on your own hometown.
Ali Lincoln
Is it wrong that I clicked on the link to this TIME article about food cravings because it had a picture of a corndog? I don’t think so, especially because it was an interesting read (and validating, since it says that corndogs are good in moderation). I love food, and food memories are always vivid for me. I still find joy in reliving some of the best meals of my life and remembering the food and the company.
And speaking of food, this article on morals and eating meat caught my eye. I don’t much care for things masquerading as meat, but I consider myself an omnivore with a tendency toward vegetarianism. I try to minimize my household’s meat intake, but I also like bacon as much as I think pigs are cute. I constantly feel anxiety about my food purchases—were animals raised humanely, farmers and workers paid appropriately, the environment affected minimally? And of course taste matters, and I don’t have unlimited income, so cost gets factored in, too. Consequently, grocery shopping with me can be agonizing as I weigh pros and cons of my options. You should see me trying to make even non-food purchases, like deciding between biodegradable silk dental floss or the cruelty-free vegan option (I went with the biodegradable floss). I know it seems kind of contradictory for a corn-dog lover to put this much thought into where her meat comes from, but my food choices affect more than just me.
Follow us on Twitter!
Here’s a look at what we were tweeting this week:

You just have to smile at these: 88 College Taglines, Arranged as a Poem https://t.co/7q8ERl8Taa via @chronicle

I never want the parade of awesome Daily Show correspondents to end.

So much good writing in this roundup of "roughly 100 fantastic pieces of journalism” from @TheAtlantic. Enjoy! http://t.co/2qoPoq6BBC

After two @TVPComms work trips in one week with @ErinAHennessy, consider this my ode to her: http://t.co/ZQqBaMHG6R