Happy National Donut/Doughnut Day! All day long, you can find free or semi-free pastry treats available for your eating pleasure at various participating doughnut retailers. Looking for the skinny on where to find your free doughnut? Check here or look up your local shop on their preferred social media platform—looks like I’ll be making stops at Dunkin’ Donuts, Duck Donuts, AND Emily’s Donuts & Café. No judgment on doughnut day, right? 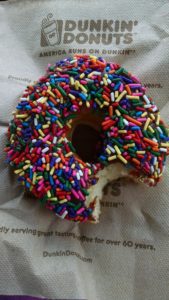 This guide to writing about trans people may be helpful as campuses seek to be more inclusive of the trans community. http://t.co/HN2BERbIdO

Make sure to read "What does a degree mean? It’s hard to tell" by Jamie Merisotis @luminafound http://t.co/NYG2cqPp7v

Wow! & take note. THIS is the level of gift getting media coverage. Harvard receives largest ever gift, $400 million http://t.co/mYCbRq5XHS

Via @nytimes: Graduation gap is even wider than the enrollment gap for poor students: http://t.co/r6PfALuOq0