Who doesn’t love an underdog? Pluto—and I’m not talking about Mickey Mouse’s dog—made a big appearance in the news this week. I felt indignant when Pluto lost its full planet status, and then kind of forgot about it. Until earlier this week, that is! Between the time commitment of the mission and the first released images of Pluto, it was me feeling dwarfed by the enormity of space and existence. It brought to mind something a college poetry professor of mine once said: we’ve really misappropriated the meaning of awe and awesome and they’ve become less potent and descriptive as a result. The Pluto images were truly awesome, in my book. 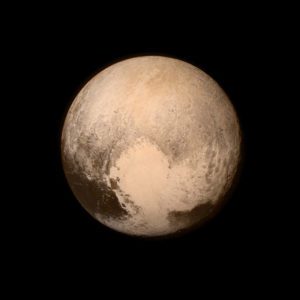 When you’ve finished marveling at the universe, scroll down and read about what’s going on in the higher ed universe.
What’s new this week:
This great Inside Higher Ed piece on much needed transcript reform featured insight from NASPA president Kevin Kruger and University of Wisconsin Colleges and Extension Chancellor Cathy Sandeen, as well as a Campus Labs mention.
NASPA President Kevin Kruger wrote a commentary for Community College Times on how community colleges can reach the last 10% of their college completion goal.
Mary Johnson, Higher One’s vice president for financial literacy and student aid policy, used her expertise to make the case for teaching financial literacy to students in a Chronicle piece.
What we’ve been talking about:
Hiring consultants can be a touchy subject, but Erin Hennessy wants you to know that it doesn’t mean that something is broken or that your team isn’t strong.
Teresa Valerio Parrot was awestruck by Pluto this week, too, and assumed everyone else was. On Inside Higher Ed’s Call to Action blog, she discussed lessons learned from Pluto on how social media has narrowed her perspective.
What we’ve been reading:
Kyle Gunnels
It’s no secret that I’m a huge supporter of international education. In fact, I think it’s an area in which we need to invest many more resources. However, it’s also important to recognize the great work being done in the field already, including by non-institutional players. In particular, the Bureau of Educational and Cultural Affairs (ECA) at the State Department oversees numerous programs that most have never heard of, including exchange programs for students and adults, youth diplomacy programs and arts and sports diplomacy initiatives. This week Evan Ryan, the assistant secretary of state for ECA, delivered a speech on international education’s role as a vital diplomacy tool.
Ali Lincoln
This story hurt to read. I was so upset about a woman who had blown through her $90,000 college fund in just three years that I couldn’t pinpoint just one thing that was making me angry and sad—the entitlement and lack of responsibility of this student, her blaming her parents for her financial failures, her control over a hefty sum perhaps without any financial capabilities. I’m still shaking my head over it, but hopefully, she’s learned some lessons (and honestly, it seems like she’s going to come out just fine, financially) that she’ll keep in mind for the rest of her life. Financial literacy matters, but student accountability also matters!
Kristine Maloney
As an incessant worrier, I was drawn to the headline of this article. What made me love it was the acknowledgement that worrying isn’t necessarily wasted energy, as all of the non-worriers in my life imply. When done correctly, “worrying is an intellectual skill,” writes the author. Of course, not all anxiety is good, or even sane, but some overthinking can be useful. And since I am what I am—a worrier—I’ll take any pros that come along with that!
Teresa Valerio Parrot
As the mother of a high schooler, I am well aware that when my daughter selects a college she will do so with my support but I won’t make the choice for her. And perhaps that is for the best, because I know she will take bigger risks than I would. For that reason, I read the story of the 300 students who will be attending Sweet Briar this fall with interest. It won’t be an easy road for the institution or the students, but I’m sending them plenty of goodwill.
Inside Higher Ed released its survey of college and university business officers, and the lede definitely caught my attention: “Nearly one in five college and university chief business officers are worried their institutions are at risk of shutting down in the foreseeable future, and skepticism over the financial model of their institutions continues from last year…” The survey results are worth reading, because CFO worries are fantastic bellwethers for the overall fiscal health and vitality of the academy. And I was struck that so many institutions plan to enroll more students as a primary response to budgetary issues. There aren’t enough students out there to save everyone’s bottom line, so perhaps we need to come together to identify some bigger solutions. Just a thought.
Erin Hennessy
Last year, there was a great deal of buzz about an article that called PR “a pink collar” field—one dominated by women but largely supervised by men. Now, there’s a new argument making the rounds, namely that social media positions for media outlets represent the true “pink ghetto,” noting that “women are only 23.3 percent of leaders in media at large, but in social media that number is 55 percent.”
Imagine being jailed for things you’d written on the Internet. Imagine spending six years in jail before being freed. Imagine opening your laptop after being released and trying to process how drastically the Internet changed in those six years. That’s what happened to Hossein Derakhshan, an Iranian blogger. His assessment of the changes to the internet: “In the past, the web was powerful and serious enough to land me in jail. Today it feels like little more than entertainment. So much that even Iran doesn’t take some — Instagram, for instance — serious enough to block.” Read more here.
Follow us on Twitter!
Here’s a look at what we were tweeting this week:

One of my all-time favorite faculty members strikes again! https://t.co/9ip094XiG4

Whoa. Nearly 1 in 5 #highered business officers are worried their institutions are at risk of shutting down. http://t.co/URyiNDZ2YI

https://twitter.com/TVPComms/status/621332359409963008;
For all of the latest news and media successes from TVP Communications, be sure to follow us on Twitter.