There’s always a lot of news and a lot going on in the weeks leading up to the holiday season—and this week has been no exception. In fact, it seems like Shia LaBeouf is the only one with extra time on his hands this time of year.
If you’ve been busy with things other than binge watching Shia movies, don’t worry. Everything you need to know is right here. So, grab yourself a cup of coffee (here at TVP Comms we don’t care what the cup looks like, as long as it’s Venti) and catch up on what you missed.
What’s new this week:
Campuses across the country confronted escalating racial tensions this week, with the University of Missouri at the center of attention. Kevin Kruger, president of NASPA, talked with Inside Higher Ed about the leadership missteps that resulted in the resignation of the UM system’s president and the flagship’s chancellor.
And, our own Erin Hennessy was sought out by the Christian Science Monitor for insight on the university’s handling of threats to black students made on social media; and by Inside Higher Ed about how Mizzou can effectively move forward.
In the world of politics, Drake University professor Anthony Gaughan’s latest column for The Conversation warns presidential candidates not to put too much stock in the polls, based on their historical accuracy.
And in sports, Drake’s Keith Miller questioned the inevitability of legal sports betting in the U.S. for The Conversation.
What we’ve been talking about:
Kyle Gunnels and I traveled to Atlanta for PRSA’s International Conference earlier this week. Here we are with our new friends. 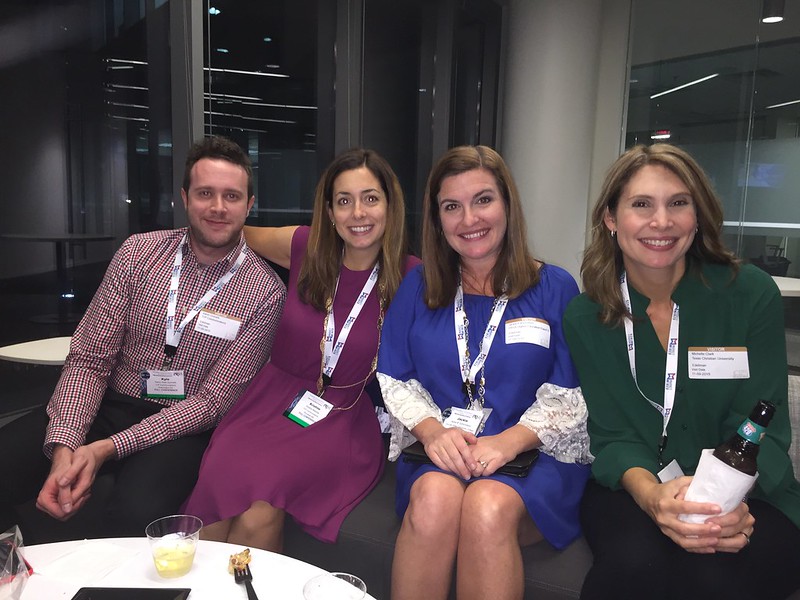 The amazing keynote speakers (including one of the best I’ve seen, James Kane, who spoke about loyalty and relationship building) and some particularly innovative sessions, more than made up for the rain and a longer-than-expected bus ride through the streets of Atlanta with a very lost driver.
Luckily, Kyle was able to find his own way to Alexandria, Virginia by Thursday to present with Jen Kane, associate director of education (USA) for University of Queensland, and UQ marketing intern Mary Catherine Bones at the NASFA 2015 Region VIII conference. If you missed it, you can check out their presentation, Communicating the Important of International Education on Campus, online.
On Inside Higher Ed’s Call to Action blog, Rachel Reuben shared timely proactive crisis communications planning tips; Alexandra Ritter of Pyxl wrote about engaging millennials; and Kevin Anselmo shared lessons for campus communicators from the University of Missouri and other institutions across the country.
What we’ve been reading:
Erin Hennessy
Almost all of the Buzzfeed links I’ve clicked in the last few weeks have led to the site’s Black Colleges Issue. From Oct. 27 through Nov. 9, Buzzfeed posted numerous articles, essays and yes, listicles about the current state of Historically Black Colleges and Universities. I particularly enjoyed this piece about how HBCUs are building the pipeline that will help diversify the tech industry and this one about how HBCUs are cautiously embracing online higher education.
Bobby Mathews
I don’t really think my wife and I are hoarders, but we’ve been packing in preparation for a move—one that just happened this past Wednesday—and I’m being confronted that we have FAR too much stuff. The coming days will be filled with deciding what to keep and what to throw away. As I think about it, processes like these are why so many people fall in love with the tiny house movement. Changing domiciles has made me realize how much value we (I) place on stuff. It’s easy to try to replace experiences and happiness with the accumulation of material goods, but that’s not the person I long to be.
Kyle Gunnels
Every so often a company will do something on social media that just absolutely backfires—ill-timed Twitter Q&A sessions or a humorless hashtag hijacking are usual suspects for this. As someone who loves social media and trying to find new ways to use online networks, I am always entertained when companies or PR agencies implement a failed social campaign. Recently, the Victorian Taxi Association in Melbourne, Australia and their PR agency decided to take to Twitter to ask people to share their taxi stories with the hashtag #yourtaxis. In their broader efforts rallying against Uber, the VTA was completely tone deaf to the complaints and criticisms of their own industry—and people began to post a flood of stories, some scary, using the hashtag. Chalk this up as another lesson in tone deafness and poor planning.
Teresa Valerio Parrot
This week is an athletics two-fer from me. Michael Phelps has had some personal and professional ups and downs, but this piece from Sports Illustrated beautifully captures the emotion behind chasing a dream and running from demons. It’s amazing to think that we are coming up on 16 years since he first stood on the Olympic podium and we were introduced to his amazing speed, goofy grin and cheering mom. He’s followed a hell of an interesting path over the years and I wish him luck in Rio and in life.
Sometimes I need motivation to get out the door and run. Well, the next time I have a pity party (usually it’s actually a stronger draw to chocolate), I am going to think of Kim Stemple and get myself moving. Kim completed the 2015 Marine Corps Marathon with a PR time, which itself is an accomplishment, and she did it six years after being diagnosed with a terminal illness. If that’s not enough, she created an organization that shares finisher medals with those “who needed recognition but [are] not able to finish a race.” Kim, I have a few medals I’m willing to part with based on your story.
Kristine Maloney
Last Sunday, Boston Globe columnist Jeff Jacoby called for a new kind of presidential debate—one not moderated by broadcast media. “In a country overflowing with talent of all kinds, why should presidential debates be deemed the rightful province of political journalists,” he asks. While the idea of removing journalists from the debate stage is interesting and could make for much more meaningful and effective debates, any changes are likely a long way off (despite Republican attempts to alter the system). So, this Saturday night you’ll find me tuned into CBS’ coverage of the Democratic debate, live from Drake University, a favorite campus of ours at TVP Comms. If nothing else, we can hope that the debate’s moderator considers the criticisms of previous debates this cycle and gives the American people something really worth watching.
Follow us on Twitter!
Here’s a look at what we were tweeting this week:

Love this slide from the "Lessons from Ebola" session at #PRSAICON #PR strategy should never be based on assumptions pic.twitter.com/2h14N36zFg

A mixed bag…good news on the financial front, challenges with campus climate. https://t.co/ykzyRRkxqX

Thinking about the fact that PR people don’t send each other pizza during challenging times, like reporters do. Should we start?

An academic research headline to grab your attention: "Harvard has the toenails of 120,000 people; here's why" https://t.co/kvfSwtonIa