Most of the team is still very much buried in winter weather (and let’s face it, Massachusetts may never fully thaw), but warmer days are on the horizon—even though as I write this it’s 12 degrees out. It’s officially time to spring ahead, people! Try not to lament the loss of an hour of sleep as you set your clocks to springtime. And maybe the cold, snowy weather will finally take a hint and take a hike… Here’s to more sunshine in everyone’s day!
What’s new this week:
It was a Drake University-dominated week. President David Maxwell and Vice President for Admission and Student Financial Planning Tom Delahunt were included in a piece (which appeared in a number of outlets including The Hechinger Report and The Washington Post) about college admission practices.
Drake also set an example for how to swiftly—and successfully—deal with false information and bad press when they found themselves mistakenly on a 25 Most Dangerous Campuses list.
And finally, Professor Mark Kende was quoted in an article on the Supreme Court’s impending decision about Obamacare.
What we’ve been talking about:
Kristine Maloney weighed in about when (sparingly!) and how (nicely!) to ask reporters for corrections to stories.
What we’ve been reading:
Erin Hennessy
Two nights ago, I had dinner with my friend Carol who, before she was my friend Carol, was my Twitter friend Carol. We’re all making friends differently now, and a lot of us are making friends online who are as dear and as close to us as some of the people we know “IRL.” This is a great boon to introverts like me, who sometimes need to wade slowly into the waters of friendship, and to extroverts who thrive on the energy of more, more, more people. This piece in The New Republic argues that we shouldn’t be making the distinction between online and IRL friendships anymore, and I totally agree.
This is a must-read for higher ed communicators about using improvisation to help scientist talk about their work.
Ali Lincoln
The conversation around college value isn’t anything new (and my answer will forever be yes, absolutely worth it), but this article looks at conversation from a different angle—are graduates getting value for their money?
I’ve also been reading all of the Boston Globe live tweets from the Boston Marathon bombing trial, which started earlier this week. This was also an informative read from day one.
Kyle Gunnels
A bit different for the what I’m reading…Here’s a Tweet that really caught my eye—a visualization of what the world would look like if it were 100 people. 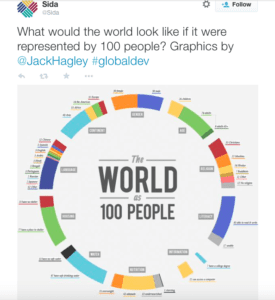 This article caught my attention because of its sensationalized headline, “How PR is Killing Journalism.” Obviously, as a PR person, I wholeheartedly disagree with the author’s assertion and feel that the points presented do not support his claim. However, I do agree that the state of both industries is currently in a very different place than it has been historically. One truth remains though, to effectively do our jobs, PR people still need journalists, and journalists still need PR people. Our industries are not “to blame” for the ills of the other—there are good and bad PR professionals, just as there are both good and bad journalists. Articles such as this that blame one side for the other’s ills without attempting to offer solutions are ineffective, but at least, hopefully, they can spark constructive conversations among those who want to do something other than simply point fingers.
Kristine Maloney
This is my favorite read of the week. For all who love and appreciate beautifully written prose. This piece is a thoughtful, nostalgic and even romantic look at the life of a New Yorker copyeditor.
Balancing work and motherhood is something I have struggled with on a daily basis since my daughter was born five years ago. Part of it is the real challenge of dividing up a 24-hour day between a demanding job AND demanding children, but the other part (the harder part for me) is dealing with the stigmas attached to be a working mom. Do people think I’m a bad employee when I miss a meeting because of a sick kid? Or, do all those other moms think I’m a bad parent when I miss a school event because of a work obligation? I’m extremely fortunate to work from home, like the author of this piece, which allows me to contribute at both work and home in much more significant ways. But that’s not a reality for everyone—and it doesn’t address the bigger societal issues. Perceptions of working mothers need to change. And their contributions need to become more widely recognized and valued.
Teresa Valerio Parrot
It’s a short article but an interesting take on the ongoing conversation of whether student-athletes should be paid. As with most of these pieces, there isn’t much meat to the argument but in the outlets that allow them, the comments are worth your while.
This piece is a great reminder about our responsibility, as communicators, to help push the placements we land to our own audiences on social media. If we want reporters to cover people and topics of importance to us, then we must help them get clicks and show reach. And here’s some interesting research that investigates how print and “legacy” journalists interact with each other on Twitter.
And this made me remember that the Thin Mints I sold oh so many years ago had an actual layer of mint between the cookie and chocolate coating. And serves as a PSA that we should never assume that our experience mirrors anyone else’s.
Follow us on Twitter!
Are you following the TVP Communications team on Twitter? Here’s a look at what we were tweeting this week:

"New research shows if students don't think they can afford #college they may not even apply” via @npr_ed http://t.co/Fsr3CfZtat #highered

Loved reading both sides of the argument here. Should students be required to work in College? http://t.co/LrUBlcbZeH via @WSJ

Can’t wait for #NASPA15 in just 2.5 weeks! RT @NASPAPFRKC: Here's an option for those who can't make it to NOLA… http://t.co/JZjI3yQAcJ