There are a couple of elephants in the room this week for every PR professional across the country.

The first is the need for and art of delivering apologies.

And the second is finding a way to get senior leaders to issue those apologies when warranted.

A couple of years ago I wrote a blog post on the topic of apologies and included what I thought was a strong (and necessary) apology. My advice still stands for addressing that first elephant in the room:

My biggest complaints with apologies during a crisis are that they usually don’t truly accept responsibility for the situation and they often fall short of addressing the enormity of the situation. An apology needs to be appropriately pithy (over emoting is never a good thing) but still address the hurt created. The litmus test for a good apology is not whether you like the statement and level of atonement, but instead if it resonates with your intended audience. This stopped being all about you when the hurt occurred.

The piece, though, only starts to get to that second elephant. For Sean Spicer’s communications missteps and tone-deaf comments on the Holocaust, the advice holds. But there is more to say when thinking about United’s passenger removal debacle.

The initial statement from CEO Oscar Munoz, pasted below, does not suggest to me that the communications team or the CEO understood the full extent of the situation or had the details they needed before issuing their statement. 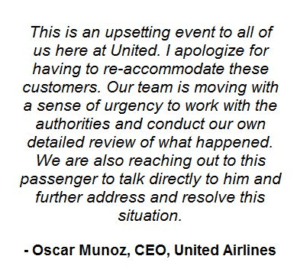 In this situation, their attempt to get in front of social media attention meant they provided context and justification for half of the story. It would have served the airline’s team well to quickly gather additional information before drafting text and adding their boss’s name and the company’s reputation to it. After all, United recently tested the general public’s willingness to accept policy and process as justification for questionable actions and quickly learned there is little appetite for corporate speak that flies in the face of logic.

Their missteps have proven to be priceless fodder for their competitors, whose reactions spanned the social media spectrum from snarky to witty (and some were untrue). We see this in higher education, too. An institution faces a crisis with mixed results and the resultant image and reputation hits are used against them by their competitors when talking with prospective students or lobbying for support of their initiatives. We’ve heard stories directly from our admissions colleagues about the uphill battle they face when stuff hits the fan.

So let’s just put all of the elephants and their calves to rest. Apologize when you need to apologize. Do so not when you or your boss think you need to apologize, but when a situation warrants a leadership stance to address events that run counter to your brand and your ethos. Do so quickly, share it broadly and know your willingness to be vulnerable and transparent needs to scale to meet the needs of your audiences. And, in honor of those elephants, have thick skin. You’re going to need it.