Even though spring break season is winding down, TVP Communications vacations are gearing up, and I am so jealous. My colleagues will soon be enjoying the Pacific Northwest, the Caribbean, Disney World and Europe—and I have no upcoming travel plans. In fact, my next vacation day is going to be spent moving from Massachusetts to Virginia, which is not exactly my idea of relaxation. But at least summer is on the horizon, and I’m very open to vacation suggestions, so send your ideas to @alilincolntvp. That is, as long as they don’t involve lifting heavy furniture or accompanying a cat on a ten-hour car ride.
If you’re at work today instead of on vacation, scroll down to get the latest higher ed news.
What’s new this week:
Congrats to Drake University and Athletic Director Clubb for being featured as an academic success story in The Chronicle.
Another Drake placement this week for Professor Mark Kende, whose expertise was included in an article on Law360.
Yik Yak’s appearance at the NASPA conference prompted a discussion of its use by college administrators. Despite some of the less than savory comments that appeared on the social networking site this week, President Kevin Kruger is hopeful that student affairs professionals can recognize the potential for having good campus conversations with the tool.
The Chronicle also highlighted NASPA’s content focus on career development and specifically how student affairs and co-curricular experiences can make the difference in preparing students for the workforce.
What we’ve been talking about:
Teresa Valerio Parrot served as a moderator for a NASPA conference panel this week and reflected on the lessons learned for higher education from our collective experience with Hurricane Katrina’s aftermath. 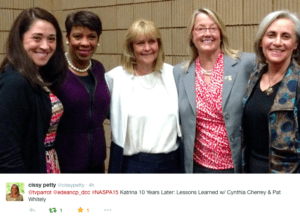 What we’ve been reading:
Kyle Gunnels
We talk a lot in education about preparing students for an “ever-connected world” and “competing in a global environment,” or any other number of buzzwords. But in terms of actually investing in and providing international experiences—our actions as an industry fall flat, many times because of an ingrained sense of American exceptionalism. This was a great opinion piece that describes “American Ignorance” of the world at large and higher education’s place in fixing the problem.
There are a lot of discussions about Yik Yak happening on campuses across the country—mainly, the conversation is focused on what’s wrong with the anonymous platform. While there are absolutely negative aspects to any online platform, this piece does a great job of describing why Yik Yak might actually be a good thing.
Kristine Maloney
Earlier this winter, as we were literally being buried alive by snowstorm after snowstorm, followed by below zero temps for days and weeks at a time, Erin asked me why I live in Massachusetts. I couldn’t come up with an answer right then, because, let’s face it: I was miserable. But the question has continued to haunt me. I know I love it here, but that was hard to remember in the midst of everything and even harder to articulate. Luckily, a fellow Bostonian has done it for me in this article. It’s worth a read in its entirety, but this quote sums it up nicely:
“It’s become clear that to me that these roots are hard to pull up. Would I be happier across the country? Maybe. But my family wouldn’t be there, and neither would my summers. I stay here because of roots, history, and soul…I know that if I moved, the leaves and snow would fall across the country and I’d be missing a piece of myself—the stubborn, hard-working piece that wore three pairs of socks at once this winter. Our history is my history. Maybe someday I’ll be able to let that piece go and see what else can fill the space it leaves. For now, I‘m sticking around.”
This article also made a big impact on me this week. To me, this piece illuminates the complexities and challenges of addressing sexual assault on campuses. But mostly, I worry about how this proposal could prolong on-campus resolutions for victims.
Ali Lincoln
I thought this was a solid read—a little bit dramatic, perhaps, but interesting nonetheless—on hypersensitivity on campus.
This was one of my favorite reads of the week (not surprisingly, about student financial aid—tis the season). A very thoughtful proposal to eliminate the FAFSA instead of just simplifying it.
Sometimes, when it’s a rough week (personally or globally), to quote Michael Scott: “Funk is the problem and the solution.” So enjoy my solution for this week.
Erin Hennessy
In the midst of a seemingly all-encompassing conversation about whether or not our graduates are ready for the real world, Stanford is offering a class called “Designing Your Life.” The class teaches juniors and seniors how to use design thinking to determine what they value and desire in their personal and professional lives. “In lieu of a final exam—the class is pass/fail—students present three radically different five-year plans to their peers. Alumni say they still refer back to their “odyssey plans”—a term that Evans coined—and revise them as their lives and careers progress.”
And on a more personal note, I am fascinated to see that we’re moving beyond a sharing economy to a shut-in economy. Basically I’m waiting for someone to tell me that it’s ok to use Task Rabbit to get my Chipotle fix…
Teresa Valerio Parrot
Sometimes we need to remember we work with college-aged students and should embrace their sense of wonder and have fun with their playfulness. For that reason, what I’m enjoying this week are the members of the Wisconsin men’s basketball team. These two stories are just pure magic. And I love that the team’s curiosity is providing opportunities to pull out some fantastic vocabulary words. Go Badgers!
Follow us on Twitter!
Are you following the TVP Communications team on Twitter? Here’s a look at what we were tweeting this week:

Congratulations to the entire @NASPAtweets team for an exceptional conference! Such important service to the #highered community.

This is amazing. RT @DeleceWrites: Ha! | Google Sends Reporter a GIF Instead of a ‘No Comment’ http://t.co/wkNBdbzsNi via @WIRED